As guests arrived the welcoming drink for November wine club was a Tio Pepe Gonzalez Byass Fino Sherry accompanied by table nibbles to get the evening into full swing.


Adrian Baughan then made a presentation on Sherry and the three main styles which we tasted all accompanied by olives, almonds and walnuts.  The research for the talk is below: 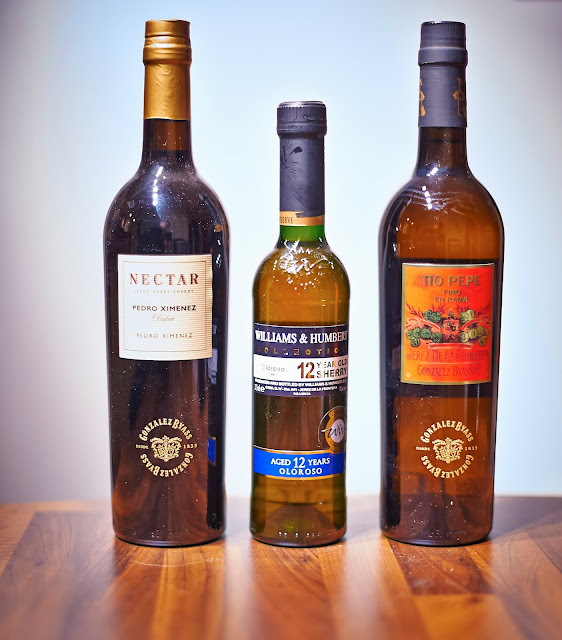 Tio Pepe Fino En Rama - Gonzalez Byass – This is a clear, straw-colored sherry that is dry, light and fragrant. It is aged with yeasts called flor.  It contains 15 to 18% alcohol. En Rama is limited production, 15% alcohol, unfiltered and bottled during spring when flor (yeast) growth is thickest.  Fino is an aperitif but is also recently marketed as a dry wine to be consumed with food.

Williams and Humbert aged Oloroso – The color of Oloroso sherry can range from amber to dark mahogany color. As the name indicates, this sherry is “fragrant.” It contains 17 to 22% alcohol. This aged example is 19% alcohol and is the classic aperitif to be served with nuts and olives.  It is also served after meals.
Nectar Pedro Ximenez Gonzalez Byass - This naturally sweet sherry is made from grapes of the same name. It is very dark and aromatic, having a bouquet of raisins. It has a high alcohol content.  15% alcohol Rich sweet and velvety smooth is served as a dessert wine as well as an aperitif.

All Sherry should be served chilled and consumed quickly just like normal wine.

Sherry History and Background
Sherry is the Spanish fortified wine from the southern region of Cádiz, and is enjoyed all over Andalucia originally as an aperitif to accompany tapas. Officially, all Sherry is produced near the town of Jerez de la Frontera, founded nearly 3,000 years ago it was mentioned in Greek texts as far back as the 4th century B.C.!  Sherry is named after the Moorish name “Sherish” but is commonly thought to be the English translation of Jerez. Cool winters, hot and dry summers, chalky soil and more than 300 days of sunshine per year produce the 3 grape varieties that make sherry.
Sherry is particularly popular with the English and has been for centuries. In fact, in Shakespeare’s play King Henry IV, Part II, Falstaff speaks in detail about the virtues of sherry or “sack,” as it was called. He ends his speech on the subject by swearing, “If I had a thousand sons, the first human principle I would teach them should be, to forswear thin potations and to addict themselves to sack.”
It may be a surprise to learn that many sherry companies are joint ventures with the British and are part owned, this is why many brands of Sherry and the bodegas have British sounding names.
The demand for sherry rose steeply and the English decided to obtain it by fair means or foul!! In 1625 Lord Wimbledon attempted a second attack on Cádiz, this time unsuccessful. It was the usual trading channels by establishing their own businesses in the Region. The 17th and 18th Centuries saw the arrival of wine merchants such as Fitz-Gerald, O'Neal, Gordon, Garvey or Mackenzie. Later they were followed by Wisdom, Warter, Williams, Humbert or Sandeman

There are actually a number of official types that range from very dry with pale straw-like yellow, to sweet with a dark mahogany color.

The following sherries are dry. This is due to the fact that their musts or grape juices have been through a complete fermentation process.
Fino – This is a clear, straw-colored sherry that is dry, light and fragrant. It is aged with yeasts called flor. It contains 15 to 18% alcohol.
Amontillado – It has an amber color and it a light and smooth sherry with a certain hazelnut bouquet. It contains 16 to 22% alcohol.
Oloroso – The color of Oloroso sherry can range from amber to dark mahogany color. As the name indicates, this sherry is “fragrant.” It contains 17 to 22% alcohol.
Raya - This is part of the Oloroso group, but it is less delicate and does not have as much aroma.
Palo Cortado - This mahogany-colored sherry falls between Amontillado and Oloroso. It is dry and has a hazelnut bouquet. It contains 17 to 22% alcohol.

These types of sherries are primarily made from two varieties of grapes – Pedro Ximenez and Moscatel. After harvest, they are put through a process called soleo or “over-maturing” that results in a high concentration of sugar in the grape. This makes a very sweet, dense must. Once it is made into wine, it is aged through oxidation and put in the soleras. Solera is the name for both the special process that this sherry goes through as well as the barrels. In the solera process, sherry is put into a series of barrels for aging. A portion of sherry from the last barrel is poured out and the barrel is then filled with sherry from the next-to-last barrel, until the first barrel is filled with new sherry.
Pedro Ximenez - This sweet sherry is made from grapes of the same name. It is very dark and aromatic, having a bouquet of raisins. It has a high alcohol content.
Moscatel – Muscat is the English name for this sweet raisin wine from the moscatel variety of grapes. It is produced in the province of Málaga and is warm and sweet, and has a dark color.

Dry varieties of sherry are blended with sweet ones to make somewhat sweet sherries.
Pale Cream and Cream – Both are sweet wines. The Pale Cream variety is light-colored and only slightly sweet, where the Cream sherry is sweet, dark and has a very intense aroma. Cream sherry is actually made from the Oloroso variety of sherry. These are good dessert wines and contain between 15.5 and 22% alcohol.
Manzanilla - This type of sherry is produced only in the coastal town of Sanlúcar de Barrameda where the bodegas actually have a special micro climate. This wine has its own Denomination of Origin and can only be produced in the town. It is very pale and dry and contains 15 to 17% alcohol.

How Sherry is made

Use Palomino, Pedro Ximenez or Moscatel grapes, harvested just as they ripen. Sweet Sherry grapes are dried prior to pressing.

Press grapes (like Palomino) that will make dry or light fino immediately.   Grapes that will make sweet or darker wine are first dried in the sun to allow the fructose to fully develop before pressing. Grapes are crushed to form a mash and the must is drained, this is the clear to amber-coloured liquid that contains the sugars and proteins from the underside of the skins. Traditionally, only the first pressing of grapes ("mosto de yema") is used to make sherry.  Subsequent pressings are then used in sherry vinegars or cooking, or table wines.

Must is put in a covered stainless-steel vat and the grapes ferment for about two months. Test for alcohol content beginning at about 45 days until the batch reaches an alcohol content of 11 to 12.5 percent. Premixed sherry flor yeast is added to jump-start fermentation

The wine is "Fortified" by adding brandy to "shock" it, stopping the fermentation process. Enough alcohol is added to light, dry wines to raise the alcohol content to 15 % and fortify darker, sweeter wines to 17% percent.

Light or dry wines  are transfered to oak barrels (botas) for aging. Botas are filled to within "two fists" of the top of the cask--about five-sixths of the way--before sealing. A layer of yeast ("flor") will grow on the surface, keeping the air away from the wine. The flor also imparts tastes and aromas that distinguish Fino and Manzanilla sherries. These sherries are aged in this manner for two to three years.

Wine can be allowed to continue to age in botas or separated from the flor and transferred to "solera" casks. Bottling the wine will not stop the aging process, but it will halt the development of taste and aroma created by the wood barrels.
Heavier sherries that cannot produce flor due to their higher alcohol content are aged using a rotation called a "solera" system. A cask of aged sherry is half-emptied to make way for a new batch. As batches are made, halves of wine casks are moved along to the next barrel, making the last barrel a blend of the oldest wine in the cellar. Since sherry is often aged for decades, the sherry in the last cask may contain grapes from dozens of vintages. 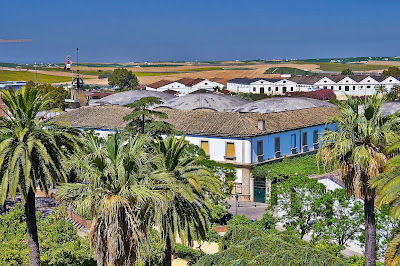 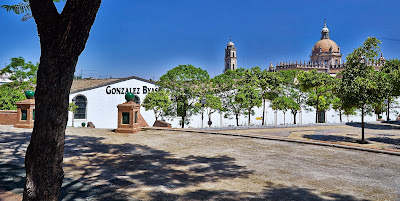 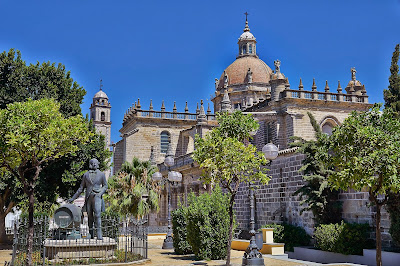 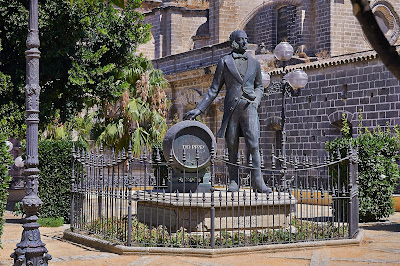 
Following the Sherries, Chris Onslow toasted the end of the second year of Wine Club with a glass of award winning Louis Brochet Champagne 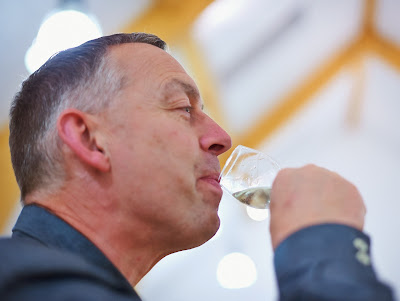 and the two forthcoming meetings were discussed -  the next Wine Club on Friday 24th January which will be hosted by Ita Woodnorth and female friends -  the theme being 'Ladies' Selection'.
The second event is a wine tasting long weekend break to the Sevre et Maine region of the Loire which is now booked for Friday 9th - Sunday 11th of May.  Fly into Nantes or drive and meet Bruce, Chris et al. for 4 vineyard visits and a Sunday picnic lunch with wines before returning home.
We now tucked in to an excellent spread of finger buffet food brought along by members.  It was almost as if the whole group had planned the meal as there was little duplication of items!! 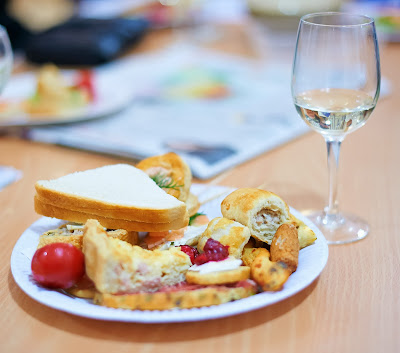 Continuing to eat the concoction of tastes from the table together with 5 more still wines to be tasted -  all chosen to be suitable companions to your festive turkey dinner.  The tasting notes are below:

Pouilly-Fuisse 2012, Domaine Cordier
Origin: From the Domaine Cordier estate with vines grown in Fulsse village and Vergisson, yields of 40 hectolitres per hectare and 15% new oak this is a modern, sumptuous Interpretation of the full-bodied style of Pouilly Fuisse,
Grape: Chardonnay
Taste: Very forward with ripe tropical peach and a rich (but not overpowering) use of toasty oak make this a wonderfully full style of Fuisse. Length on the finish is long and harmonious.
Enjoy: Slightly more upfront oak and fruit than some of Cordier's other wines, a creamy dish like stroganoff would complement a wine like this.

Brouilly 2012, Domaine des Maison Neuves
Origin: Brouilly is the southernmost and largest of the Beaujolais crus and as such is often described as "typical" in regards to Beaujolais. Domaine des Maison Neuves are a quality conscious grower that eschews the use of herbicides to give healthier vines.
Grape: Camay
Taste: A deep coloured wine, showing great finesse and fruit intensity. The nose gives powerful aromas of ripe berry and currant notes. The palate shows soft tannins and a balanced acidity on the finish.
Enjoy: Enjoy with white meat dishes.

Roaring Meg Pinot Noir 2012, iVIt Difficulty, Central Otago
Origin: Mount Difficulty is a boutique winery located in Bannockburn in Central Otago, The Bannockburn area isinternationally recognized as one of the few places in the world where the petulant Pinot Noir variety has found a home outside Burgundy.
Grape: Pinot Noir - VEGETARIAN
Taste: This wine exhibits a lovely mix of red and black berry fruits with further complexity gained from oak spice. These characters are balanced by soft tannins, balanced acidity and a fruit-driven finish.
Enjoy: This is a cracking, complex wine to be enjoyed over the next five years. Enjoy with pork loin and peach chutney or rabbit casserole.

Errazuriz Wild Ferment Pinot Noir 2011, Casablanca Valley
Origin: The grapes used for this wine come from the north west of the Casablanca region, where the cool seabreezes provide perfect growing conditions for Pinot Noir. Unlike most wines, naturally occuring yeasts on the grape-skins begin the fermentation, usually yeast is added.
Grape: Pinot Noir
Taste: Highly aromatic yet very subtle in style, the fruit aromas show violets and spice, which are backed up on the palate by great concentration and soft ripe tannins.
Enjoy: This amazing Pinot Noir is drinking beautifully now, and will age gracefully over the next 4 years. Try with roasted lamb.