Being a member of a Wine Club will mean a thirst, not just for wine but also  a thirst for knowlage and information on the world of wine.  For the presentation given at our last meeting this was provided in spades. Not just information but information that's presented with a skill and panache.  Fo this we need to thank David Lloyd, a speaker who very clearly  researches thoroughly and is able to present complex and though provoking information in a way that allows us all to enjoy and appreciate.    Lat Friday we heard not just of wine but some too the philosophical aspects of wine making and enjoying. 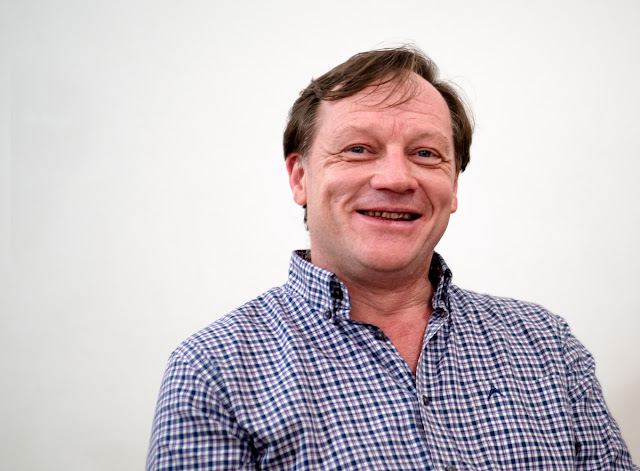 David began with a look at Food and Wine’s top ten most unusual wines, of which David promised attendees would try one of them.
These included everything from snake bile wine and lizard wine to birch sap and rose petal wine. Even seagull wine and pumpkin wine were on the list, but in the end we tasted Retsina, pine resin originally used by the Greeks to seal their wine vessels – the pine then infusing the wine.

As for the seagull wine (not tried!), David read Suzanne Donahue’s tasting notes: “If you opened up a Toyota’s carburetor and drank the leftover fluid from inside, that would be pretty close. It goes down hard and settles in even worse. But I must say it sure gets people inebriated in a hurry. And the next day’s hangover is nothing short of spectacular. You’ll feel like you’ve been repeatedly beaten over the head by a giant…well, seagull.” 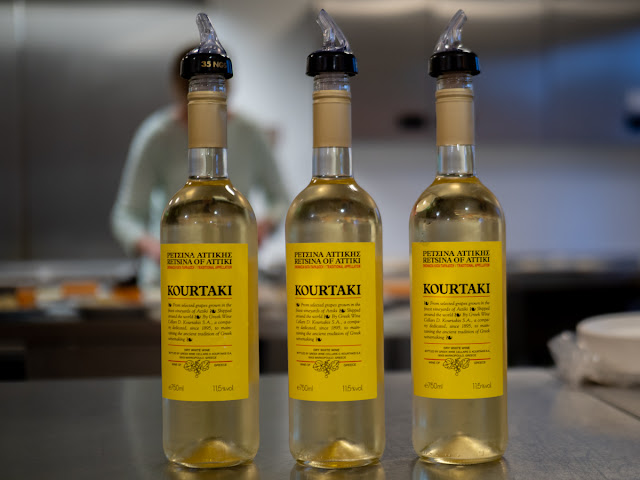 The second wine was called Fruit Orchestra, a blend of Chenin Blanc and Viognier, from the Western Cape of South Africa. Available from the Coop at £6.

This wine was selected following the story of the fascinating research by Adrian North from Heriot Watt University whose research showed that the type of music that plays in a room can actually alter the taste of a wine to a considerable extent. So the next time you visit a restaurant and order a drink, pay close attention to the background music - it might totally change whatever is in your glass.

The research is interesting and something of a taster for other research information that told more of influences on the tasting of wines. this wine was well received and good wine and from our local coop as well. 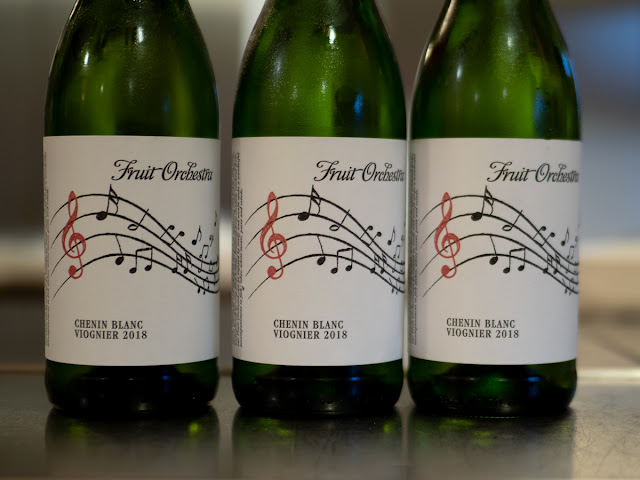 We looked at philosophy and wine, with recommendations to read ‘The philosophy of wine:  A case for truth, beauty and intoxication, by Cain Todd; ‘I Drink Therefore I Am: A Philosopher's Guide to Wine’ by Roger Scrutton and ‘Questions of Taste – The Philosophy of Wine’ by Barry Smith.

This session and session four looked at whether the judgements of 'experts' have any objective validity? Is a great wine a work of art? Can a wine be feminine, profound and cheeky? Questions like these will have been entertained by anyone who has ever puzzled over the tasting notes of a wine writer, or been baffled by the response of a sommelier to an innocent question.

These sessions also looked at the mischievous research of Frederic Brochet, of the University of Bordeaux, he conducted two separate and very mischievous experiments. In the first test, Brochet invited 57 wine experts and asked them to give their impressions of what looked like two glasses of red and white wine. The wines were actually the same white wine, one of which had been tinted red with food colouring. But that didn’t stop the experts from describing the “red” wine in language typically used to describe red wines. One expert praised its “jamminess,” while another enjoyed its “crushed red fruit.” Not a single one noticed it was actually a white wine.

In recognition of this, we tasted a white Pinot Noir, mixed with pinot Grigio, from Italy, available from the Oxford Wine Company at almost £14 a bottle.

For many the best wine of the evening, not confusion on costs here, the price would seem to be well represented in the wine, a very enjoyable white wine made with a grape  normally associated with quality reds. 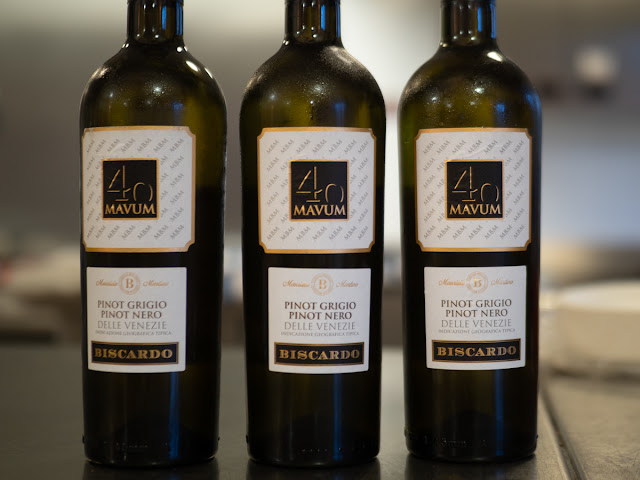 The second test Brochet conducted was even more damning. He took a middling Bordeaux and served it in two different bottles. One bottle was a fancy grand-cru. The other bottle was an ordinary vin du table.  Despite the fact that they were actually being served the exact same wine, the experts gave the differently labelled bottles nearly opposite ratings. The grand cru was “agreeable, woody, complex, balanced and rounded,” while the vin du table was “weak, short, light, flat and faulty”.
Forty experts said the wine with the fancy label was worth drinking, while only 12 said the cheap wine was.
David then looked at a study by Antonia Mantonakis, a wine researcher from Ontario’s Brock University. This showed that people who know more about wine were more likely to report that difficult-to-pronounce wines were worth more money.

As a result, we tasted a £14 Bordeaux with a very long name – a Chateau Les Tourelles Du Barrail, 13%, available from Eynsham Wine Cellars, at almost £14.  this was a very enjoyable Bordeaux, having heard David's talk I hesitate to say this but yes a great example. 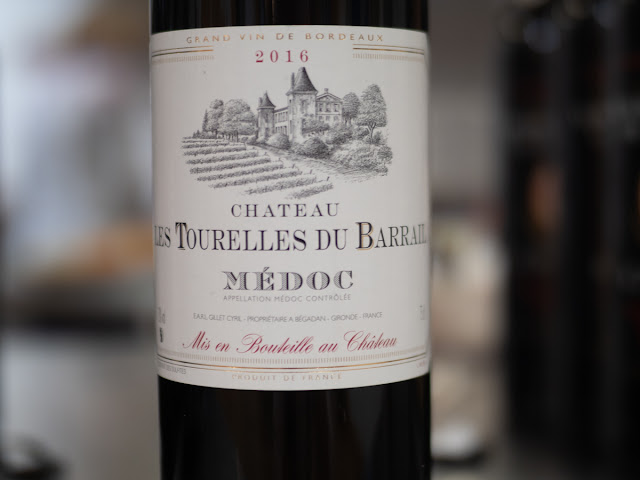 We also looked at wine and health with some encouraging findings that a glass of red really is good for the over forties.
In celebration of this, we tasted Apothic Inferno – an apothecary being a medieval pharmacy. It is a Californian wine, aged in whisky barrels for 60 days, thus weighing in at 16%. Available from Sainsbury’s at £13.50 a bottle. 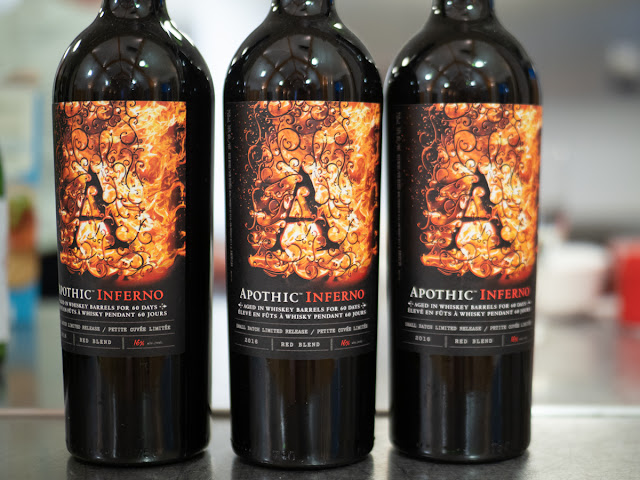 We finally looked at wine and culture, looking at the book by Mark Forsyth ‘A short history of drunkenness. Many remarkable facts over the centuries on how alcohol impacts people as a society.
Since the Greeks believed ‘If you can drink a lot and still behave, then you are an ideal man with great virtue of self control,’ we finished on another Greek wine, a sweet one served with chocolate brownies. This Mavrodaphne of Patras Cameo is aged in oak barrels and is 15%. Shop around – prices seem to vary, as does availability.

The conclusion came in two quotes
Our last wine was  in the Grape Surprises section, after a white Pinot Noir the a sweet red served with brownies. A good end to a good selection of wines and very good talk. 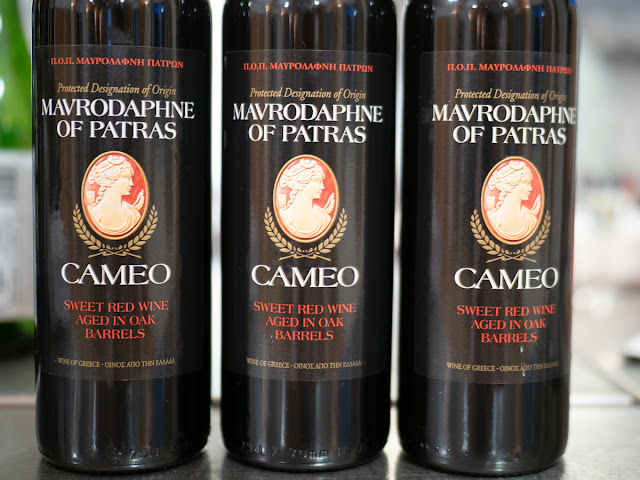 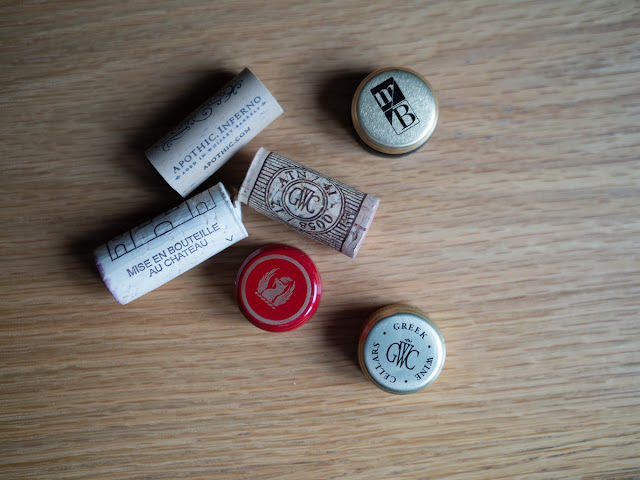 I was about to post the blog and the door is knocked and my neighbour is standing on the doorstep clutching the attached:

Yes the Chinese snake wine, in person as it were! 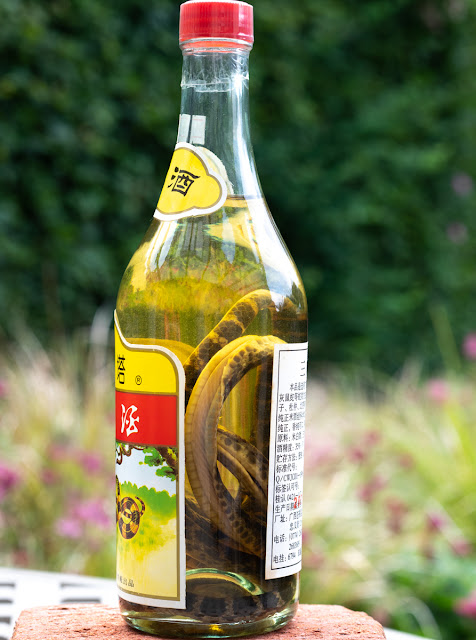 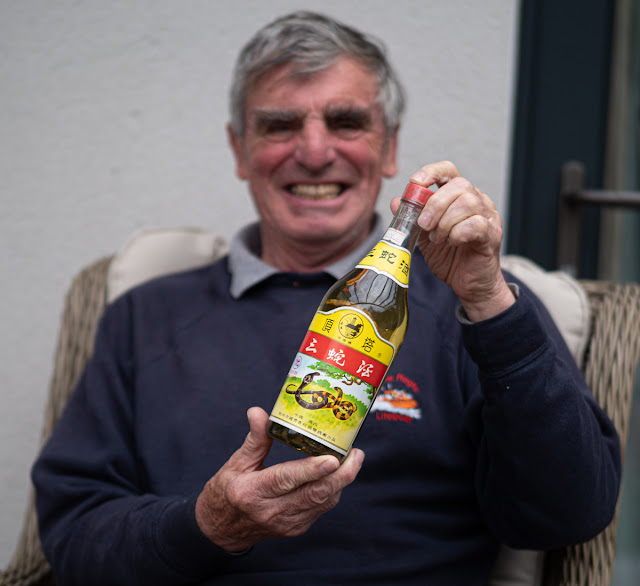 Posted by Bruce Hammersley at 09:33 No comments: