The Wine Club goes to The Napa Valley

We all know of it, we know Napa Valley is in California and we have heard of the wines, we know they are said to be some of the best in the world. We know only a little of how much wine is produced,  we know the wines are  expensive and that in '76 they amazed the world in a famous blind tasting which resulted in them being classed as the best wines in the world.

We were taken there with the very excellent guide, our very own David Lloyd   David was hoping to spend time on sabbatical in California and so we joined him on his virtual trip and time there.

The evening was set up well, and was like a game of football, it came in two parts, we kicked off with the wine area, the size, the values, the costs of the wines and the amount produced, the history and the famous blind wine tasting of the mid 70's which shot the Valley into the  stratosphere of quality wines a position that have enjoyed since and still enjoy today.

The members do like a good quiz, so we had two, they were based on what we had just seen and heard, David must have been pleased as the members all did well remembering much of the detail of the presentations.

Here I take the opportunity to say a big thank you to the team that put the evening together, in addition to David a big thanks to Chris and Phill, and to Louise, our quiz masters and tech co-chair.  All just brilliant.

For the second part of the evening David gave told us of his dream trip around California and the Napa Valley, as mentioned David was hoping to spend time this year when he took a sabbatical, sadly that is now not going to happen but his time in planning was not wasted as he was able to take us on that tour, and the tour was terrific.

A you will imagine the winemakers of the Valley know how to show their vineyards to very best, and in the Valley this can be to an amazing degree.

To do this  we climbed aboard the Wine Train and visited a number of vineyards, 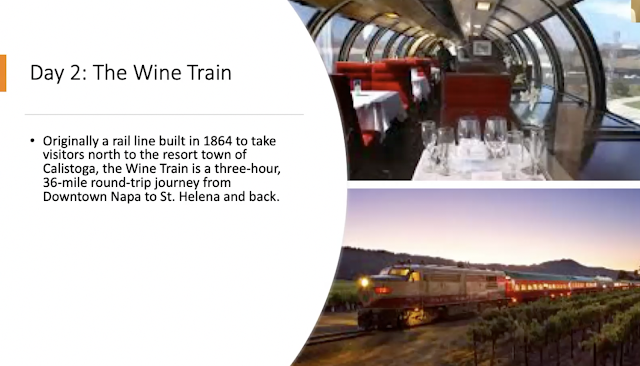 We went on to see more all were amazing and fantastic:

Take for example the  Castello di Amorosa. Built at stupendous cost tof $40,000,000 to showcase the wines of the world famous vineyard. 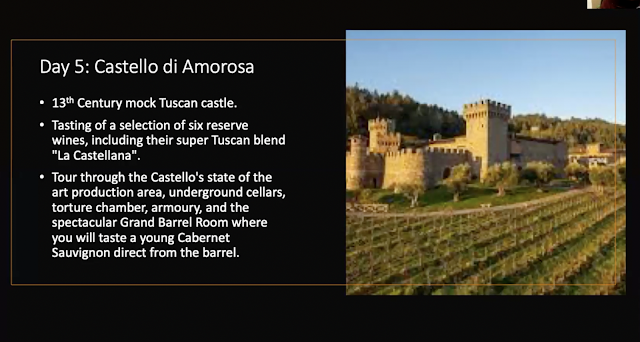 Or the vineyard of the film producer Francis Ford Coppola: 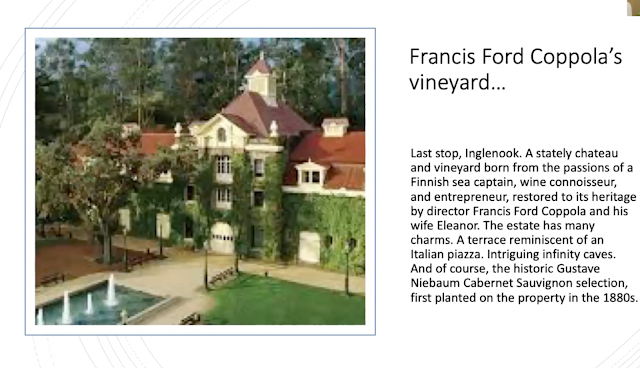 David tells us of the highly exclusive vineyards such as Screaming Eagle, no wine tasting possible and wine can only be bought if you are 'on the list' of those that can buy. Then a limit of how much can be purchased and then the wine could be sold on for a multiple of the amount bought for.   If you are think the Napa Valley is not like anywhere else in the world of wine you would be right. And our thanks for David for lifting the lid on the world for us. 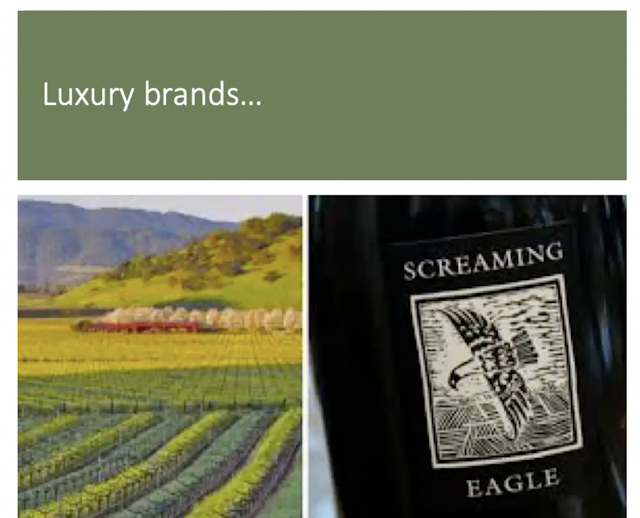 It was very clear from the general feeling of the membership that the Zoom meetings are well received, in some ways offering some advantages over meeting in the Village Hal, that said though it is also clear we will be happy to be back in our usual venue but sadly that still looks like being a way off. On the horizon though we could, perhaps,  have our usual social evening in later November if restrictions are eased a little more.  While that is on hold I think we can say it just may be possible to meet then and remain within the restrictions needed for group meetings.

What we do want to do is to have another Zoom meeting in August, normally we assume too many are away on holiday in August but not so this year.

As soon as we are organised on that front I will be emailing with dates etc.

Bruce
Posted by Bruce Hammersley at 02:38 No comments: